The most expensive one hour session I’ve ever had…

While I was tidying up around the house yesterday, I started repacking my camera gear after using some of it for the impromptu winter session outside. I stumbled across a lens cap with no lens to go with. I thought to myself “Hmmmm… that’s odd” and proceeded to search my office for the lens which happened to be my Canon 35mm f/1.4L. Note: if you clicked on the link, take note to how much it cost. After searching around for 5 mins around the house, I started to get worried… I tried to recall the last time I used it. The last session I did was last Sunday and I used the lens to take some pictures indoors of the Cusumano Family before heading out to a nearby park by their home. I switched lens from my 35mm to my 85mm while I was in the woods and that was the last time I saw or used it. oh crap. Again, that was last Sunday and if you don’t live in St. Louis, then let me fill you in on what kind of weather we’ve received since last Sunday. That Sunday during the family session was really nice, but Monday is when the Snowpocalypse hit… it started with rain, turning into freezing rain and then on Tuesday, the major snow storms came. Wednesday and Thursday were cold nights and Friday we got another 4-5 inches of snow which brings us up to this Saturday. This is the part where I start to panic. My face goes white as I start to imagine the worst with images in my head of the lens covered in layers of ice and snow.

Ali and I drove back to the park so I could trace my steps back to figure out where I put my bag down during the photo session. Keep in mind that the last time I was there, the floor of the woods was covered in leaves and branches… but now it’s there is a layer of ice and snow. I tried to use the trees as reference points and we began kicking the top layer of snow around in hopes of finding the lens. I called Erin (from the Cusumano Family session) to see if there was ANY chance that I left the lens at their place AND maybe she hasn’t come across it during the course of last week (which is highly unlikely of course). She searched around the house and her truck (which we used to get to the park) and could not find it. :( After spending 45 mins kicking around snow, Ali and I give up and I start to comes to terms that this family session cost me a $1,500.00 lens. To say the least I’m in a CRAPPY mood and I feel terrible for Ali who has to put up with my grumpy attitude the rest of the day.

Later that day I call Josh (a co-worker, my second shooter and friend) and told him what happened. He tells me how he used his son’s metal detector to find a co-worker’s ring that was lost in the snow, in a parking lot after the lot was plowed. I’m not terribly optimistic since somebody might have found the lens already (which is not likely given the recent weather) but I’m willing to give it a try. I meet Josh bright and early the next morning (now Sunday) with his son’s metal detector and we begin the sweeping the area. After an hour, we manage to dig several holes to find a piece of glass, a cigarette wrapper and an Exacto knife but no lens. I tell Josh that we should just give up since it’s hopeless and I need to take off for a session later in the morning anyhow. But Josh continues to scan the snow and I continue to dig more holes as the detector occasionally goes off here and there. Finally, we get another beep from the detector and I start to dig… BOOYA! Lens found! Albeit it’s covered in snow, in cased in ice and I had to carefully extract it from the ice. I guess the lens must have rolled off my bag as I was taking pictures and didn’t even notice. After the lens had several hours to dry off and warm up, I mounted it to my camera and give it a try. It works! There are no obvious problems but I’m not going to take any chances and sending it off to Canon Professional Services to be checked, cleaned and repaired (if needed) so I can get it back in action again. If anything, it’s a true testament to the quality of Canon products.

Anyhow, I can’t thank Josh and Ali enough for helping me look and finding the lens… THANKS GUYS! I LOVE YA BOTH!

Thanks everyone for reading!

Me after digging the lens out – 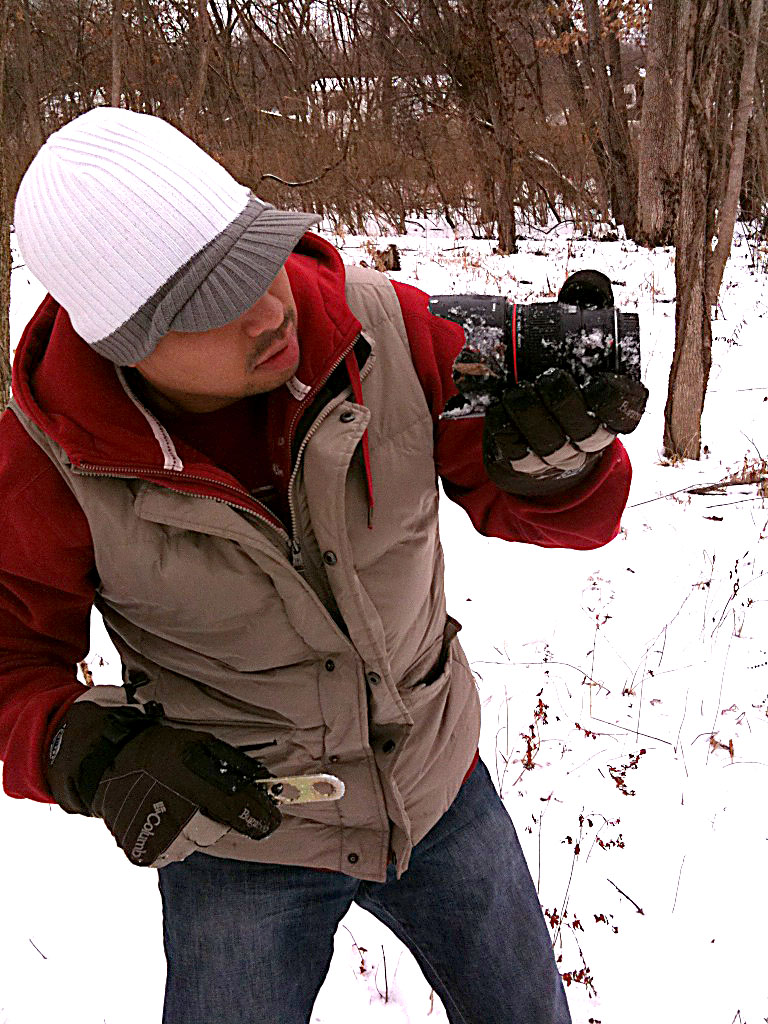 Josh with the lens and metal detector –